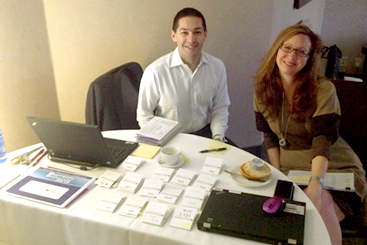 When the executive delegation from pharmaceutical company AstraZeneca and its subsidiary, MedImmune, attends a conference, each participant seeks to forward the company’s business goals by maximizing their ability to network with other attendees. In 2014, AstraZeneca selected Jujama’s scheduling platform, BioProScheduler Teams, to provide the delegation with “outside meeting” scheduling capabilities at the J.P. Morgan Healthcare Conference (JPMHC), where many meetings take place outside the densely-scheduled main agenda. The Jujama BioProScheduler Teams tool enabled AstraZeneca’s executives to engage other attendees in the most professional, reliable and efficient manner, and provided the flexibility to accommodate the inevitable last-minute schedule changes by enabling the team to prioritize meetings and deploy appropriate delegates to each one.

Chris Yochim, Director, External Relations, Global Products and Portfolio Strategy for AstraZeneca, said, “Nadia Dailey and Robert Naismith, the developers of Jujama and BioProScheduler Teams, have a deep knowledge of the life sciences industry, informed by their founding of MedTrack, the life sciences corporate intelligence database. Because of that history, we knew the high quality of their technologies and their appreciation for the needs of life science companies.

“The AstraZeneca/MedImmune delegation of about 70 executives—led by four team coordinators—used Jujama’s BioProScheduler before the conference to schedule meetings ranging from two to twenty individuals. At JPMHC, meeting space is always at a premium, and this system allowed us to track every delegate and every one of our reserved meeting rooms, so that we could select appropriate venues, such as large or small suites, or working lunches, according to our needs.” 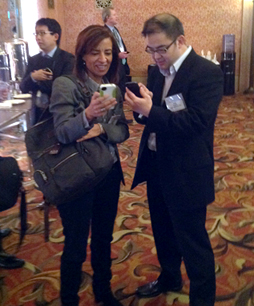 Once at the conference, BioProScheduler Teams continued to provide flexibility. Mr. Yochim said, “The Jujama BioProScheduler system facilitated our ability to tweak our schedules, even at the event. For example, if an important opportunity arose for a senior executive and he or she needed to drop out of a conflicting meeting, it was simple to substitute another appropriate delegate because we could generate custom reports that showed the schedule of all team members, or just select executives. This capability allowed us to triage our delegates to address every opportunity effectively—whether coordinating a large meeting with a big delegation from another venture capital group, or arranging for our C-level executives to drop in somewhere for a quick meet-and-greet.”

Mr. Yochim added that AstraZeneca appreciated Jujama’s emphasis on customer service. “As Jujama crafted this customized contact and scheduling platform for our delegation, the Jujama technical team was immediately responsive to every inquiry, every request. I never once waited a whole day to hear back from the team with our updates. We were so impressed with the Jujama BioProScheduler system—and how it eliminated the nightmare of scheduling 70 delegates in Excel and Outlook—that we signed up to use the system again at future conferences.”

“Delegates call the J.P. Morgan Healthcare Conference ‘The Circus,’ because there is so much going on, all at the same time. Using Outlook and an Excel spreadsheet to schedule meetings across different functional heads is inefficient and outdated. Migrating to an app on our mobile phones and tablets vastly improved our ability to ensure the right executives were present for every meeting we arranged. In addition, the JUJAMA technical team was immediately responsive to every inquiry, every request. I never once waited a whole day to hear back from the team with our updates.”
Chris Yochim
Director, External Relations, Global Product & Portfolio Strategy

Merck was also among the first of a growing number of life science companies to discover the value of BioProScheduler. Nadia Dailey, President and CEO of JUJAMA, said, "BioProScheduler addresses scheduling and coordination needs common to everyone who attends life science partnering meetings, so it is rapidly becoming a popular tool. Pamela Demain, the Executive Director of Corporate Licensing for Merck used BioProScheduler to manage a delegation of 80 executives at JPMHC. She told JUJAMA that it was imperative that Merck have a seamless, user-friendly scheduling system in place. JUJAMA enabled Merck to book over 300 meetings in the course of three days. Ms. Demain said, 'This is quite a testament to JUJAMA's capabilities. JUJAMA is excellent to work with, and tailored BioProScheduler to our exact requirements.'"